So it is no surprise that I found that three of Thomas’ and Louisa’s children had the middle name Mansbridge, Louisa’s maiden name, the last of them with that middle name being born in 1849.

So, what was I to think when I stumbled across a chap yesterday called George Swatton Mansbridge born in 1849? Here’s my theory.

I think his parents were brother and sister of Thomas and Louisa – i.e. a sister of Thomas married a brother of Louisa – which would mean their children’s surname would be Mansbridge but it being highly likely some of them might be given the middle name Swatton.

Disappointingly, I have been able to find no record of George Swatton Mansbridge in the census record – there are a few George Mansbridges but missing the middle name on the census it isn’t clear which might be the one in question. Finding him in later censuses will also be impossible because, and here’s the interesting bit, in 1875 he emigrated but not to America, Canada or Australia which were the most common destinations… but to Japan!

He became a constable in the Yokohama Municipal Police. There is another tie in here to Thomas and Louisa because one of their sons, John, became a police constable in London.

In 1880, he changed careers and joined the Mitsubishi Company, employed in the docks at Nagasaki working on ship salvage – at that time shipping was the core business of Mitsubishi. He would work for them for 28 years until he retired.

What I find most remarkable about this is the unusualness of such a lifestyle change – Japan in the 1870s was only just coming out of the rule of the Shogun warlords. It was only in 1872 they were finally defeated and the emperor regained central control of the country ending a period of 250 years of cultural isolation during which the death penalty was prescribed for foreigners entering or Japanese nationals leaving the country! 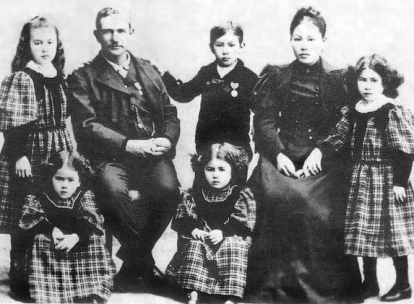 Less than 5 years later we find George coming into the country to settle and marrying a local lady with whom he would have 5 children. I think this picture is great even though the two little girls at the front (who appear to be twins) look singularly unimpressed having their photograph taken!

I frankly have no idea how to go about tracing their descendants but it makes me wonder if those children, as adults about the same age as their father in this picture, might still have been living in Nagasaki at 11.01am on the morning of 9th August 1945 when Major Charles Sweeney’s B-29 Superfortress dropped the Fat Man plutonium bomb on the city. I hope they weren’t.