It’s not the dastardly Prince John of Robin Hood story infamy I’m referring to; rather the court of John, more properly, Dom João, Prince, Regent and ultimately King of Portugal. 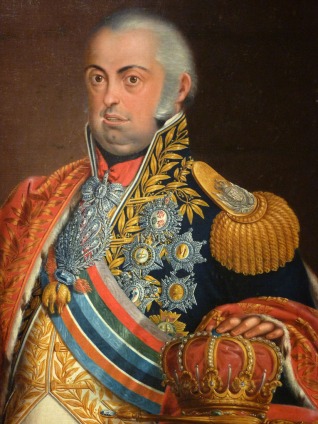 I am currently working on a follow-up to my novel, Bitter Glory, and it is set in the “phoney war” hiatus between the end of the short-lived Peace of Amiens and the re-commencement of land hostilities, so roughly the autumn of 1803 through to the end of 1804.

During this period, one of the protagonists in the story, and my personal favourite character of the Napoleonic period, Jean Lannes, was assigned to Lisbon as French ambassador. There is no more unlikely figure in history to whom to assign diplomatic duties than the foul-mouthed, blunt-speaking, aggressive former dyer’s apprentice. But Lannes’ experience as ambassador is food for a later blog post. What I want to talk about here is more to do with the environment in which Lannes’ mission was based, the frankly bizarre royal court of Portugal.

For generations the Portuguese royal family, rich beyond belief from the gold fields of Brazil, had been dominated by incest, in-breeding and madness. John’s elder brother was married to his own mother’s sister. Combine this with the religious mania, as exhibited by John’s mother, and unrestrained sexual excess (one of John’s great-grandfathers made a habit, no pun intended, of taking nuns as mistresses) and you will get the idea that the court was a strange environment in which to grow up.

One of John’s great-grandfathers was Philip V of Spain, who was afflicted by what we would now refer to as manic depression. Another, João V of Portugal, the one with a preference for nuns as mistresses, from 1742 onwards suffered several strokes, paralysing the left side of his body and gradually, he, too, sank into a deep melancholia.

When João V died in 1750, he was succeeded by his son Joseph I who was utterly passive and ineffective,  busying himself with hunting and playing cards, while Portugal was governed by the ruthless Marquis of Pombal.

When Lisbon was devastated by an earthquake and tidal wave in 1755 Joseph became so paranoid that he refused to live in any of the royal palaces, instead having a tented, and later wooden, residence constructed in the hills outside the capital.

In 1777, John’s mother, Maria, became queen when her father, Joseph, died. Maria’s husband, who was also her uncle Pedro, was given the title “King” but in reality he was her consort. They had seven children together but four died within eighteen months of being born. Pedro died in 1786, then, in 1788, tragedy was heaped upon tragedy for the Queen. In September her eldest son, José, (the one married to his aunt Benedita) died of smallpox, in November her only surviving daughter Mariana died of the same disease, as did Mariana’s husband and newborn baby two weeks later. Finally, at the end of that same month Inácio de São Caetano, Maria’s confessor for more than thirty years, the man on whom she placed her entire trust and confidence, died of a massive stroke. From this point, with her loved ones dying one after another, the Queen retreated into uncontrollable grief and melancholia. Her condition quickly deteriorated.

In 1792, ministers concluded that their Queen was mad and turned to her only surviving son, John, to assume the direction of public affairs. In the meantime, they called in Dr. Francis Willis, who had treated George III of Great Britain, to treat the Queen but he left in 1793 having failed to realise any improvement in her condition.

When fire destroyed the wooden and tented Ajuda Palace in 1795 the whole court moved to Queluz. There, Maria was closed up in her quarters and the palace was filled with her demented cries as reported by the English author William Beckford who visited the palace: “The most agonising shrieks – shrieks such as I hardly conceived possible – inflicted on me a sensation of horror such as I had never felt before.” 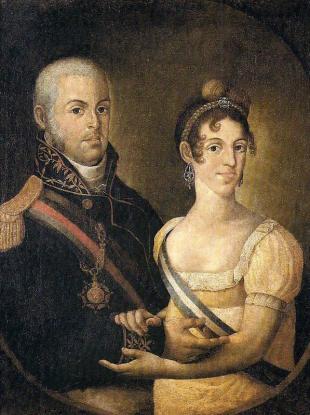 Prince John and his wife

­­Finally, in 1799, John was officially named Prince Regent. He was fat, lethargic and looked older than his years. He always carried in his pockets two small boxes, one containing snuff and the other grilled chicken legs to gnaw at idle moments. Since 1785 he had been married to the tiny Spanish princess Carlota Joaquina who stood hardly more than 4 feet, 6 inches in height. How tall she could have been when they married I wonder as she was only ten years old at the time. And, remarkably, she grew to be even uglier than her husband with bloodshot eyes, a hooked noose, bluish lips, uneven teeth and “unruly and dirty hair”. They had nine children although the last five were suspected of being fathered by one or more of her many lovers as she had become estranged from her husband and their good looks were taken as an indication that John couldn’t possibly have been the father!

As you can see, there is fertile ground in which to set something of a story.