Alfred and Florence married in 1908

In the lead up to the centenary of the end of World War 1 I wrote a piece about the service my grandfather, Thomas, and his two brothers, Walter and Alfred performed during the war.
At the time, I had no idea why the oldest brother, Alfred, had been made a sergeant as soon as he volunteered. Similarly, I was puzzled why a man in his early thirties with a wife and four children, a fifth on the way, would volunteer for service.
Having done some more digging I think I have answered these questions. I have also discovered a postscript to the story which is just a little weird.
I’ll start off with the crucial information that solved the initial mystery. I found enlistment papers for Alfred for the Boer War, dated February 1901 which essentially answer everything.

So, going through this document, it would appear that as a 21-year old Alf volunteered for service in South Africa, stating on his papers that he already had previous military experience with “1st Hants RE (Vols)”, which translates as the 1st Hampshire Royal Engineer Volunteers.
This unit was formed at Portsmouth in April 1891 with the majority of the rank and file being workers from the Portsmouth dockyard. They renovated an old drill shed for their use and acquired forty tons of gravel to lay down to form a parade ground. While their facilities may have been rough and ready it seems they became a very professional outfit.
In 1896 the 1st Hampshire took first place at a special course of instruction in fortress engineering at Chatham. Of the nine NCOs in the team from Portsmouth, six passed the examination as “very superior” whilst the other three passed “very satisfactory” placing them first in all England for the third time in the five years since they were formed. So it was no trivial matter that Alf had served with them.

Following his enlistment in 1901 (note that on the form it was so soon after the death of Queen Victoria, no new form had been printed, and the recruiting sergeant has manually crossed out “Her Majesty” throughout), Alfred joined the Royal Engineers and was assigned to 37th Field Company.
Once serving he would probably have looked something like the soldiers in this picture (these are members of 11th Field Company RE in Durban).

But his prior service in the 1st Hants RE (Vols) and in the Boer War explains why he volunteered again at the start of WW1. With the huge numbers of raw recruits that flooded into the army then, the authorities were desperate for recruits with previous experience who could immediately be made NCOs to help knock the untrained masses into shape. 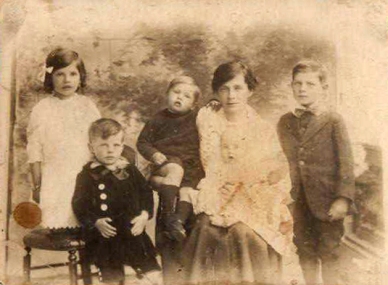 because of his former service in South Africa.

And as for the postscript I mentioned…. unfortunately, Alf would not survive the war, dying on active service in the Balkan campaign in October 1916, probably of malaria that killed so many allied troops in that theatre.
The picture here is a family portrait his wife organised, the baby in her arms having been born within 2 days of his father’s death. I guess as a form of commemoration Florence decided to give the baby a middle name, Salonika, where his father died and is buried… and I’m not sure if that is poignant or just odd!