My great-grandfather’s older brother was named John Mansbridge Swatton, Mansbridge being the maiden name of his mother, and he was born in Kings Somborne, a small village in rural Hampshire on 16th April 1847.

His father was a bricklayer and the family moved to Gosport in the 1850s when the massive fortress complex there was begun which must have drawn in building labour from all over the region.

Indeed, in the 1861 census John, then aged 13, is described as a public works labourer so I would guess he was working on one of the forts with his father at that time.

However, John must have decided relatively early on that following his father’s example and being a brickie wasn’t for him. In 1866 he had seen his younger brother leave home to join the Royal Navy and the following year John packed his bags and moved to London where, just a week before his 20th birthday he enlisted as a constable in the Metropolitan Police; Warrant No: 48283. 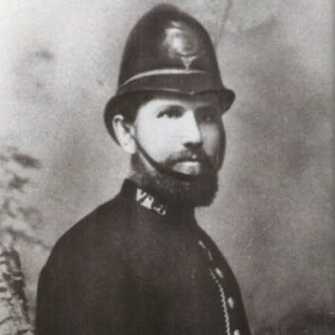 Following training, of the 19 regional divisions within the Met, he was assigned to “V” Division; Wandsworth. As per the instructions given to police officers, he was expected to live in the vicinity of his division and in the 1871 census he was living at 16 Blesborough Place, Pimlico – just over the river from Wandsworth, not far from Vauxhall Bridge and the Tate Gallery.

He was to remain a police constable in Wandsworth for the next 26 years.
During his time on the force, the police and criminal system in general would see many changes.

It was only the year after John joined the Met that Britain witnessed its last public executions.

In April 1868, Frances Kidder was the last woman to be hanged in public, outside Maidstone jail for the murder of her step-daughter. The following month saw the final public hanging in Britain when Fenian Michael Barrett was executed outside Newgate Prison for mass murder, having been found guilty of participating in the Clerkenwell Outrage, an explosion that killed 12 people outside Clerkenwell jail the previous year.
It was in the same year, 1868, that the policy of transportation to Australia was finally abolished which resulted in the incarceration of many more convicted criminals at home. One such place they were housed was Wandsworth Prison, in John’s Division, which was built in 1851 on the “Panopticon” design to enable the “separate system” to be used for 700 prisoners in individual cells, each with toilet facilities. The main part of the prison, having four wings radiating from the centre, was for male prisoners with a smaller separate building for females. From 1870, conditions at Wandsworth deteriorated when the toilets were removed from the cells to make room for extra prisoners and the practice of “slopping out” introduced which was to remain in force until 1996.

Considering what the daily routine would have been like for a “bobby” on the beat in the 1870s and 80s I guess it could be characterised as a mix of tedium and violence. Police constables had prescribed “beats” that they walked every day at a prescribed pace with their behaviour and performance carefully monitored – it must have been a pretty boring routine. But that seems to have been regularly broken up by violence.

We think of London being a relatively violent city – it is indeed difficult to get away from the outrage and the horror presented on the news all the time about rising levels of violent crime in the city. But in reality, Victorian London was a MUCH more violent society. And the assaults on the police are a good indication of the level of that violence.
In 2017, police officers in the Met (a force numbering 31,000 officers) reported just over 2000 assaults on them, most of which resulted in no injury. In 1868, in a force that numbered under 8900 officers there were 1130 assaults leading to injury from what the wonderfully descriptive commissioner’s report described as “criminals of the most desperate and abandoned character”.

It is not without reason that standard issue for officers patroling some of the rougher beats in London was a sword!

John resigned from the Metropolitan Police on 10 May 1893 whereupon it seems he chose to move back to Gosport. Once there he took over a pub, The Alma on Forton Road, with his son, George, working with him as a barman and living in the pub.

Finally, George took over the pub when John retired but John is still recorded in the census of 1911 as living at The Alma.

Sadly The Alma is with us no longer either. It ceased to be a pub in the 1990s and has since been demolished.