I will state from the outset that the story of Henry Charles Swatton is an odd one. He was my first cousin twice removed – that is, my great great uncle’s son.

He was born in Wandsworth, London in 1873; his father being a police constable in V (Wandsworth) Division of the Metropolitan Police. 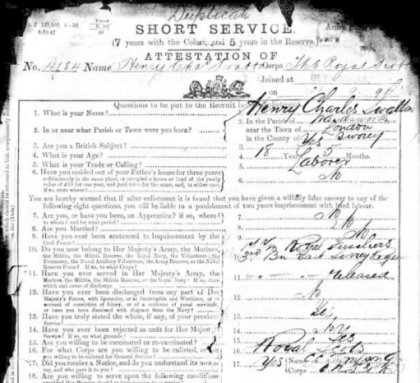 From what survives of his record it looks like that was a mistake because he got himself into disciplinary problems pretty much straight away.

The litany of offences on his Company Defaulters record begins within a month of him enlisting and goes over two meticulously handwritten pages:

28th Oct 1891 – Having articles of kit in his possession belonging to Private Kelly (by implication, stolen) – 7 days confined to barracks

But the following day he evidently decided he had had enough and matters took a serious turn for the worse when he deserted from the barracks in York where the regiment was stationed. He was reported missing on 21st April and was apprehended by the police in Sheffield on 9th May dressed in civilian clothes.

He was confined in HM Prison Wakefield pending collection by the military authorities and his prison entry survives:

He was taken back to York for court martial. His trial was held at Strensall Barracks in York on 20th May 1893. The record for this still exists and it is almost comedic that aside from desertion, the army records he was accused of “losing by neglect his equipment, clothing and regimental necessaries” and then goes on to list specific items and their cost which Henry had evidently dumped when he ran including trews, belt, haversack, boots, Glengarry cap, cap badge (separately listed) and “31 articles of necessaries”.

He was sentenced to 56 days hard labour and stoppages of pay to cover the cost of the lost equipment.

Once he had served his time in the military stockade he was back on the defaulters list:

But it’s at that point that his service record ends. I haven’t found discharge papers for Henry so it is unclear how the remainder of his army service went.

All we can conclude from the documentation that still exists is that 4184 Private H C Swatton was really not a very good soldier which makes the second half of this tale even stranger….

When I was researching the service history of Henry Charles Swatton I started to get quite confused as there seemed to be two service histories for the same man. I assumed I must have made a mistake and went back to double and triple check because this was turning out to be a very strange tale.

I have already told the first half, the lamentable service history of 4184 Private H C Swatton of the Royal Scots… a not very good soldier by any measure. As I said, it is uncertain what happened to him in the second half of his original army service as his record is missing from the middle of 1893.

I found another set of Army enlistment papers for a Henry Charles Swatton dated March 1901. Initially I thought there must have been another Henry Charles Swatton (unlikely, but certainly possible), especially as some of the details of background in the second set of papers were at odds with what I knew of Henry.

Our HC Swatton was born in Wandsworth but the new papers said he was born in Ashtead near Birmingham in the county of Warwick.

The form also claims the new recruit had previous army experience in the Royal Anglia Reserves and the Manchester Regiment. So my first reaction was this must be another chap coincidentally having the same name as the one I had previously been researching.

However, later on in the enlistment forms he identifies his wife’s maiden name – Frances Mary Bowman – who I knew definitely to be our Henry’s wife (they having married in April 1899) and their address in Gosport like most of the other Swattons at that time.

Also, there is no place called Ashtead anywhere near Birmingham – the only place of that name in England is near Epsom in Surrey.

So here we had our defaulting deserter of 1893 re-enlisting in 1901, falsifying some of his details, to serve in the 93rd (Sharpshooter) Company, 23rd Battalion Imperial Yeomanry bound for South Africa and service in the Second Anglo-Boer War.

Just 12 days after enlisting he was on his way to South Africa where he served for the next 10 months.

The picture here is of the 21st Battalion raised at the same time as Henry’s 23rd so in appearance they would have looked very much the same. The 23rd were deployed around Bloemfontein, their usual role being to protect the lines of communication which stretched from Cape Town some 800 miles to Pretoria.

From his service record we know that he was entitled to the Queen’s South Africa medal for service in the war with two clasps (Cape Colony and Orange Free State) indicating the areas/campaigns in which he served.

One other oddity about this story is that another person researching their family posted a picture of a soldier on Ancestry which they asserted was Henry Charles Swatton and he is shown with corporal’s stripes (known at the time as Lance Sergeant). This posed a problem for me because the uniform is very specific – consulting experts on a Victorian military forum I found out only four regiments had sphinx collar patches as shown in the photo which included neither the Royal Scots nor the Imperial Yeomanry.

However, one of them that did was the Manchester Regiment, the very same regiment Henry asserted he had experience with on his second enlistment.

Perhaps, our Henry got a transfer to the Manchesters from the Royal Scots at some point and that part of his service record is missing – I don’t think we will ever know. But it looks like he managed to turn his career around and at least became a better soldier than his first couple of years demonstrated.

And after the Boer War, when Henry returned to Hampshire, he followed his father’s example and took over a pub – the West End Inn in Titchfield.  The 1911 census records him living on the premises with his wife and, by then, six children.

Unfortunately the pub closed a few years ago, otherwise I think I might have been tempted to go down there for a beer.