Gros as a young man

On the 26th of June 1835 a body washed up on the banks of the Seine at Meudon, near Sèvres. The artist Antoine-Jean Gros’ longstanding sense of personal failure compounded by his abiding melancholic nature had finally become too much for him to bear and he had committed suicide.

But his career had always been one of emotional conflict, his naturally romantic flair often at odds with the coolly cerebral neo-classical style in favour with his closest contemporaries. In the end he could not arrive at a balance between the styles that satisfied himself and his critics and ultimately that exacerbated his own sense of failure. In hindsight though, it can be seen that Gros’ style was a major influence on the likes of Gericault and Delacroix who followed him. It is a tragedy that he could not see that for himself.

Perhaps though it is as Napoleon’s official “painter of battles” that Gros is best remembered and in a few short years after Napoleon’s coronation he became famous for his grand representations of Napoleon at his most dashing and heroic all of which were aimed at enhancing the myth of the Emperor; in the end, closer to fantasy than fact. 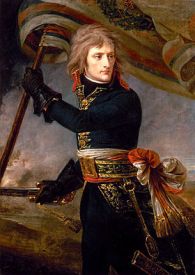 Napoleon on the Bridge at Arcole

It was on a visit to Genoa that Gros met Josephine de Beauharnais who, in turn, introduced him to Napoleon.  In 1796 Gros was with the French army at the Battle of Arcole and saw Napoleon famously lead the attack on the bridge. This incident he immortalized in his first major work, Napoleon on the Bridge at Arcole.

A succession of grand tableaux followed:– Napoleon Visiting the Pesthouse at Jaffa, the Battle of Aboukir, Napoleon on the Battlefield at Eylau.

But after the fall of Napoleon, the principal subject of his grand, mythologizing propaganda paintings, Gros’ star rapidly waned. None of his later works were received with the same enthusiasm as his earlier pictures and his melancholy, stoked by constant sniping from the exiled Jacques Louis David, gradually became all consuming.